Non-Epileptic Events are seizure-like events that are not caused by Epilepsy.

There are many causes of Non-Epileptic Seizures. Here is a list of the most important causes:

The attacks caused by these disorders can look like Epileptic Seizures. This may lead to a mis-diagnosis of Epilepsy.

What are Psychogenic Non-Epileptic Seizures (PNES)?

PNES are a special type of Non-Epileptic Event. They are produced by psychological stress or worry.

These are real attacks that can be very frightening.

PNES is used more commonly. In practice, I myself prefer to use the term NES instead of PNES.

It is possible to identify the exact mental stress causing this problem. Sometimes, the source of stress may be hidden deep within our mind.

Can you explain the rest of the words in “PNES”?

So, this is a disease with repeated “Seizure-like-attacks arising from the Mind”.

Ah okay! So this is not a “real” disease like Epilepsy?

Nothing could be further from the truth!

PNES is a very real problem for those who suffer from it.

While we know a bit about the brain, we know very little about the Mind. We don’t completely understand how the mind affects the body, but we know that it does.

People who have a lot of stress, for example, are very likely to have higher blood pressures and early heart attacks. Would you ever walk up to a person who was having a heart attack due to high stress, and tell him he/she didn’t have a real problem? You wouldn’t – It would be quite unintelligent to do so.

PNES is a similarly serious problem, except we don’t understand it as well as we know a heart-attack. This lack of understanding reflects a shortcoming of medical knowledge, rather than of the patient.

These are real events which need to be understood properly.

Some people’s minds are very sensitive to stress. Small incidents, such as arguments, may overload their brain with stress.

Every time their mind becomes overloaded with stress, it stops functioning normally. Their mind may behave in abnormal ways – for example, they may have a sudden explosion of panic.

That is when you get a Non-Epileptic Seizure.

This vicious cycle needs to be broken.

Can PNES & Epilepsy occur in the same person?

This is a crucial point to remember – The same person may have both Epileptic & Non-Epileptic attacks. Some researchers have estimated that up to 25-50% of patients with Epilepsy also have PNES attacks.

Therefore, even if you have PNES, it is absolutely essential to make sure that you don’t have Epilepsy as well.

Many researchers have highlighted this point. In 2013, the International League Against Epilepsy (ILAE) proposed a set of minimum requirements for a diagnosis of PNES:

Thus, a person who has both Epileptic Seizures & PNES may be labelled as having “only PNES” instead.

Unfortunately, we have no instrument that can measure psychological stress. We therefore need to rule out other problems, before concluding that a person has PNES only.

So, how do we diagnose Psychogenic Non-Epileptic Seizures (PNES)?

Sometimes, doctors can make educated guesses. The movements during stress-seizures (Non-Epileptic) are slightly different, than those due to electrical storms (Epileptic). PNES can be longer than Epileptic seizures. The patient may be able to respond partially during PNES. And so on…

Most patients who have seizures also get an MRI and a routine (1-2 hour long) EEG. The MRI and EEG may be if the patient has Epileptic seizures, or both kind of seizures. They are normal if a patient has only PNES.

If after all these things, the cause of seizures is still not clear, the doctor may advise EMU evaluation.

The patient is admitted to the hospital in a comfortable room. He is attached to the EEG machine. In addition, other machines measure his heart rate, blood oxygen level, and ECG at all times.

The goal is to “capture” a seizure.

This determination is quite definite. Therefore, EMU evaluation is called the “gold standard” for evaluation of psychogenic Non-Epileptic seizures (PNES).

Traditional medications given for Epileptic Seizures (Anti-Epileptics) are not effective against PNES.

Treatment of PNES is possible. Improvement is possible. Many people stop having PNES entirely after proper treatment.

Treatment of PNES is a multi-step process. It is best coordinated by a mental health professional such as a psychiatrist or counsellor. This process requires both the doctor and patient to work hard and be patient.

The first step is to find the exact reason for mental stress.

Sometimes, this reason may be hidden deep within our mind.

Our mind unconsciously suppresses unpleasant memories. These memories may be bad events from our childhood, or even recent events such as loss of a job, or the death of a loved one.

The second step is to find ways to reduce this stress. These methods may include:

Sometimes, the source of stress cannot be found.

In these cases, general measures to reduce the stress are useful. They may include:

Prognosis of Psychogenic Non-Epileptic seizures (PNES) – Do they stop?

PNES can stop after treatment.

PNES usually do not case bodily injury. However, they are a real condition. They are produced by severe mental stress.

There are 2 things to remember:

A recently published paper [Pohlmann-Eden 2019] has a nice summary figure.

Click on the image below to read the larger version. 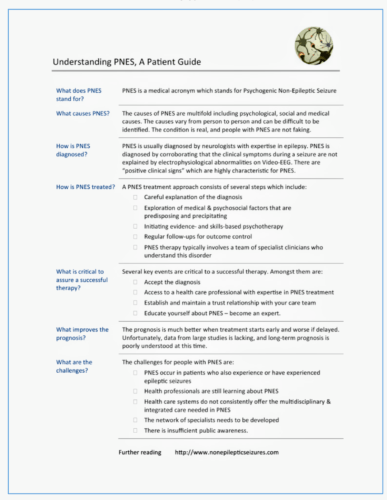