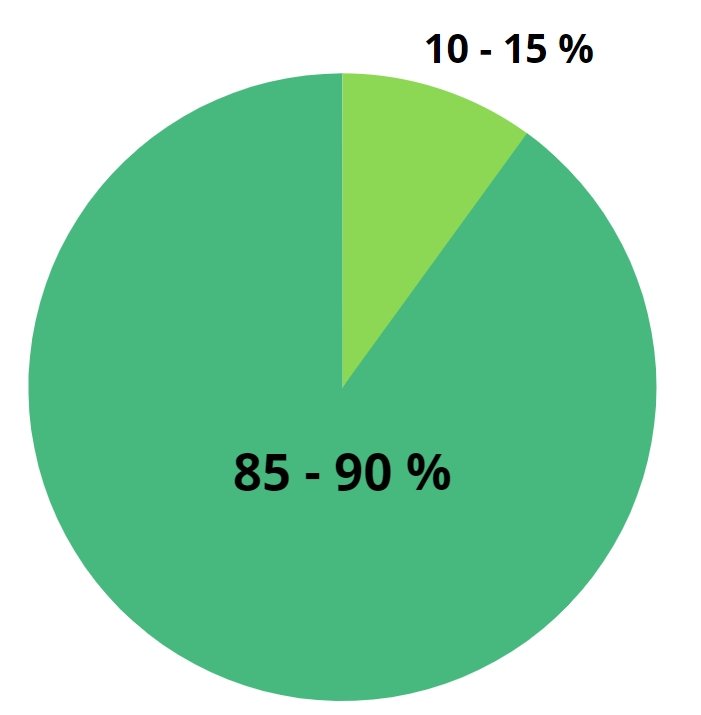 According to Medtronic’s data, 85-90% of patients have significant improvement after DBS.

DBS does not reduce all symptoms equally. It reduces some symptoms more than others.

So, we should discuss Deep Brain Stimulation Success rate under different headings.

Please note that this is the average improvement after DBS. A few patients may not benefit. The reasons for DBS failure are also described below.

Shaking (Tremor) responds very well to DBS. In most cases, the severity of tremor decreases by more than half (>50%).

In the future, customized DBS may reduce tremor by almost 90%. Customized DBS includes putting the wire into other targets (such as the zona inserta). Currently, we can use this data during programming to stimulate these areas as well.

Tremor is the most noticeable symptom of Parkinson’s. But, most patients complain that stiffness and slowness are most disabling.

DBS works great in reducing these symptoms as well. Both are reduced by more than half (>50%). Again, future customized DBS may be even more successful.

As expected, patients with Parkinson’s walk slowly. They may also have episodes when they feel “stuck” to the ground. This is called “Freezing”.

After DBS, patients walk much faster. Also, “Freezing” is reduced.

What is the problem?

DBS does not improve balance. In about 1/3rd of patients, it may worsen balance.

So are falls more common after DBS?

No. Most studies indicate that falls decrease after DBS. For example, Dr. Karachi reported that falls reduced in 1/3rd of patients after DBS.

You see, one of the major cause of falls is “Freezing” of gait. Reduction in “freezing” leads to a reduction in falls.

Again, this is an average. If you are falling due to instability rather than freezing, you may fall more often after DBS (see box).

If I fall often, should I get DBS?
You should discuss 3 questions with your doctor:

1. Why am I falling? Is it because of Freezing or Instability?
2. Do I have a “Parkinson’s Plus Syndrome”?
3. Is another problem (for example, B12 deficiency) causing my falls?

If instability is the cause of your falls, proceed only after understanding the pros & cons. If you have a Parkinson’s plus syndrome, consider not getting DBS.

Patients with Parkinson’s disease have non-movement problems as well. These include sleep problems, constipation, pain and many others. You can find articles on these problems on the site.

Thankfully, DBS decreases many of these non-motor problems. For example, sleep improves after DBS. I, along with my colleagues at Kings college, published a research paper on improvement in sleep after DBS in 2018.

The effect of DBS on some non-motor symptoms is unknown. For example, we don’t know if DBS reduces excessive sweating and urinary problems.

Before going on, let us look at the simple terms “OFF” and “ON”.

Let us look at the 2 most common motor fluctuations:

DBS reduces these fluctuations. On average, patients get 4-5 hours of extra ON-time after DBS. This is the major success of DBS. Also:

The goal of reducing your symptoms is to improve your quality of life.

So, the ultimate measure of Deep Brain Stimulation Success rate is an improvement in Quality of Life (QOL).

The distinction is crucial. For example, if your slowness decreases by 60-70%, your doctor would be happy. But are you satisfied? Has that enabled you to have a better life?

Does a high Deep Brain Stimulation Success rate enable you to have a better life?

The evidence behind this is quite robust. In multiple studies, patients have reported improved quality of life after DBS.

For all these symptoms, the progression of underlying Parkinson’s itself may worsen QOL and ADL in some patients.

In how many patients does DBS fail completely?

It is difficult to confirm that there is no improvement in ANY of the symptoms mentioned above. Medtronic reports this data on its website [here].

But that is not the end of the story. Some of these initial DBS failures can be converted into successes.

A recent study looked at 14 patients who initially did not respond to DBS. [Study available here]

This study was conducted by the University of Florida & Harvard University. A majority of these patients had been diagnosed with Parkinson’s disease before DBS.

After they rectified these errors, 21 patients (slightly more than half) improved.

So, with careful post-operative care, the Deep Brain Stimulation Success rate may be higher.

Bottom line: How many patients are happy they had DBS

Here are the most critical questions. Are people who had the DBS happy with their decision? Would they recommend it to others?

This is an excellent way of measuring the Deep Brain Stimulation Success rate for Parkinson’s disease.

The results are very encouraging.

For example, in 2019, doctors from the University of Pennsylvania asked these questions to 320 patients who had DBS for Parkinson’s disease.