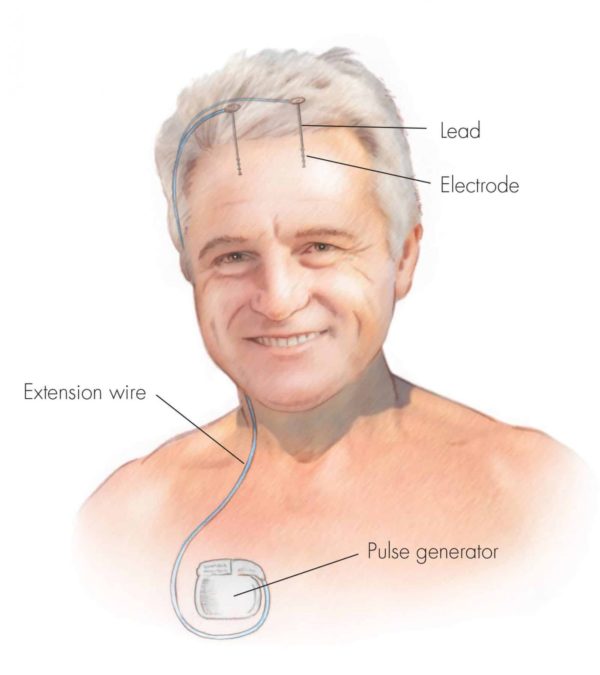 DBS is the short form of “Deep Brain Stimulation”. DBS is one type of Parkinson’s Surgery.

DBS works by passing a small current into the brain. This current is passed into only to a small part of the brain.

The doctor selects one out of two brain parts (either the GPi or the STN).

DBS works by changing the electrical currents in these areas. At present, we cannot mathematically calculate these changes.

Let us learn more about these topics:

What is Deep Brain Stimulation for Parkinson’s disease?

DBS is electrical stimulation of the brain by using a small machine. DBS can stimulate many brain areas.

DBS is actually approved for many diseases. It is not just a “Parkinson’s surgery”. It can be used for epilepsy and other movement disorders as well.

The basic setup is the same.

The DBS battery is inserted below the chest skin. Two small wires from the battery go up to the head. The wires go through the skull. They are inserted into the desired area of the brain.

For Parkinson’s disease: This target area of the brain is usually the “Subthalamic Nucleus (STN).

In some patients, another area is chosen as the target. This other area is the Globus Pallidus interna (GPi).

How is the target chosen? Read this article [Click here]

DBS can dramatically improve Parkinson’s symptoms. There are many before-after videos available on the internet.

For example, here is a video posted on youtube by the Neuromedical Center in USA.

No one completely understands how Deep Brain Stimulation (DBS) works.

Doctors used to cut small parts of the brain to reduce Parkinson’s symptoms. This surgery is called a “tomy”, meaning “to cut”. For example, Thalamo-tomy, Pallido-tomy.

A small electrical current is used to stop small bleeds during surgery. This is called “electrical cautery”.

While doing this current, they noticed something odd. When they passed a current into certain brain parts, the Parkinson’s tremor disappeared!

Would it be possible to continue the stimulation indefinitely? This question led to the design of the DBS electrical system around 2000. DBS was approved for widespread use in 2002.

So, it is one of those things where we don’t know how it works. But years of experience have shown us that it does. Like, complimenting your spouse…

The reality is complex, and as yet, out of reach.

Each of these targets (for example the STN) contain many millions of little cells arranged in very intricate circuits.

Probably, the DBS current stimulates some of these cells, while other cells stop working. Some circuits go into overdrive, while others shut down.

This varying effect also varies according to the current characteristics, especially frequency.

The net effect is, at present, impossible to calculate mathematically.

Empirically though (with our own eyes), we see that when the stimulation is given at a high frequency – Parkinson’s symptoms decrease markedly.

What is the best theory for why DBS works?

Before starting, let me note that reading this part is not critical. It is very technical.

As noted before, we don’t really understand how DBS works. But there are numerous complicated theories.

What happens when you put a wire into the STN and pass a high-frequency current through it?

The other theories are a variation on this theme. Click here for a short table about these proposed mechanisms.

Some DBS effects cannot be explained by this theory.

Therefore, there is a lot more to discover.

If the mechanism of DBS is not known, why should I consider it!?

Because it is quite safe.

There are many things for which we don’t understand the exact reason. For example, we are still finding out more about the myriad benefits of exercise.

For example – How does exercise improve Mood? We don’t understand that too well. But it is easy to grasp that exercise is good for you.

So, Should I get DBS surgery for Parkinson’s?

“How does DBS work?” is a good question. “Should I get DBS?” is a separate question.

In addition to the correct patient, the proper target (STN versus GPi) needs to be selected. [DBS location]

The risks of DBS surgery are low. You can read more about the risks by clicking here. [DBS risks]

One of the main barriers to DBS surgery is cost. Thankfully, it is cheaper to DBS surgery in India. You can read more about DBS cost in India and other specifics here. [DBS in India]